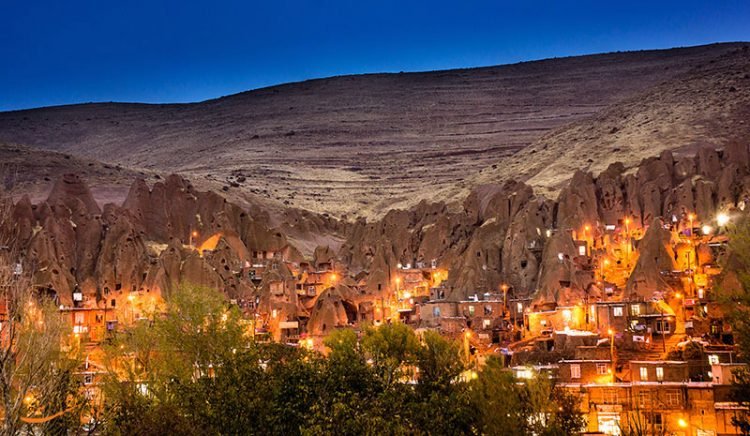 Tucked away in the northwest corner of Iran is the quaint and mysterious thirteenth century village of Kandovan. It’s a village in Sahand Rural District, in the Central District of Osku County, East Azerbaijan Province, Iran. Kandovan is also part of the Lake Urmia region, the region that is central to the start of the second phase of Zoroastrian history. This village consists of manmade cliff dwellings which are still inhabited. The troglodyte homes, excavated inside volcanic rocks and tuffs similar to dwellings in the Turkish region of Cappadocia, are locally called “Karaan”. Karaans were cut into the Lahars (volcanic mudflow or debris flow) of Mount Sahand. The cone form of the houses is the result of lahar flow consisting of porous round and angular pumice together with other volcanic particles that were positioned in a grey acidic matrix. All these aspects, make the landscape look like a gigantic termite colony. This method of dwelling makes the residents modern-age cave dwellers or troglodytes. After the eruption of Sahand these materials were naturally moved and formed the rocks of Kandovan.

When you first come upon the houses, you might not notice them, as the stone used to expand the dwellings outside of the caves, mimics that natural color of the original stone. But once you get closer to the village, you can see the windows, power wires, doors, and chimneys jutting out of the rock face. Most communities have become modernized, with power and some even with running water, all while blending perfectly into the natural surroundings. The volcanic stone is both easy to manipulate and sturdy enough to support these ancient constructions.

What is particularly amazing about these homes is that they have supported life for centuries. They are ancient cave dwellings. The first inhabitants were from ancient tribes, but these homes have been updated and passed down from inhabitant to inhabitant.

Most communities have taken special precaution to preserve as much of the original cave as possible, so that both the exterior and the interior have that authentic Kandovan feel. Some houses rely on the natural cave formations, while others have been hollowed out into larger rooms, and have even been whitewashed to create a more modern look and feel.

Most of the cave houses are two to four in height. In a typical house, the ground or first floor is used as an animal shelter, the next two floors are used as living areas, and the top floor is used for storage. There are reports of tunnels connecting towers owned by a person or family.

While Mount Sahand itself is one of the beauties of the region, the surrounding country abounds in a natural beauty that is today but a shadow of a legendary past. Some believe that legendary past beauty is preserved in the biblical story of the Garden of Eden. Ancient Persian gardens, also called baghs, were renowned for their spectacular beauty.
The houses are known as karan in the local dialect. One interpretation has the word Kandovan being a plural form of kando, a bee’s hive. Another interpretation says that Kandovan means Land of Unknown Carvers. The use of ‘van’ to indicate the plural is found in the Avesta: cf. ashavan. Nowadays, residents speak a Turkic dialect but have traditional Iranian family names, names such as Kayani. The mountains and rivers in the region have both Persian and Turkic – and perhaps even Assyrian – names.

The residents declare that their village is around 700 years old, and was formed by people fleeing from an advancing Mongol army and who used the caves as a refugee and a place of hiding. Even after the Mongol occupation of the country came to an end, many of the refugees decided to continue living in the caves and gradually expanded their cave homes to form permanent multi-level houses. Another legend states that eight hundred years ago a body of soldiers hid in the caves during a military campaign. However, there are indications that the caves of Kandovan were inhabited as far back as 3000 years ago – around the time when the Zoroastrian Medes and Persians inhabited the region.

Nature’s gifts in Kandovan extend to the healing properties of its natural spring water. In particular, the waters have traditionally been used to help dissolve kidney and bladder stones. Some of the area’s wild plants as also reputed to have healing and vitality-giving properties. The combination of Kandovan’s unique natural landscape, beauty, and the manner in which its inhabitants have adapted to the environment, has made Kandovan a popular destination for visitors. While the weather in the region has likely changed over the past ten thousand years, Kandovan still receives a fair amount of winter snow. In addition, the number of cool months in Kandovan exceeds the number of warm months.